Shuffle and Repeat: A Review of George C. Wolfe’s “Shuffle Along”

I am pleased to announce that my essay on last year’s revival of Shuffle Along has been published in the March issue of American Quarterly. The entire March issue is wonderful, if I do say so myself. It is an honor to have my work published such fine scholarship. The introduction to “Shuffle and Repeat” is printed below, but the entire essay can be found here. 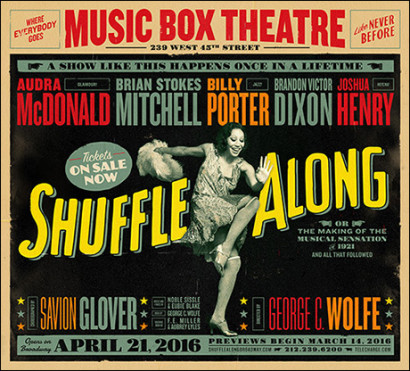 The first act of Shuffle Along, or The Making of the Musical Sensation of 1921 ends on a note of joyful expectation. By that time, the show’s creators and performers have paid their dues, laboring in an out-of-the-way studio uptown, securing funding through shifty white producers, and shuffling across the East Coast in an attempt to hammer out the kinks in their production and make enough money to stay afloat. They have finally begun to taste success. Their steady progress and inevitable triumph leave ample room for some of the most intricate and impressive tap routines to grace the Broadway stage in years, to say nothing of the magnificent vocal work of Audra McDonald and her colleagues. But that joyful promise is not met in act 2, perhaps foreshadowing the fate of the historically significant musical itself…

Shuffling and Repeating Beyond the Page