“Notes from the Field” Review

I saw a number of fantastic productions in New York last year and I was lucky enough to be able my thoughts about a few of them. My review of Anna Deveare Smith’s incredible Notes from the Field was published in the September issue of Theater Journal. I’ve included a brief excerpt below, but the entire review can be found here. The issue also contains exciting scholarship on theatre, museums, and cultures of display! 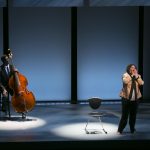 Anna Deavere Smith’s work has long been propelled by an urgent sense of social justice. In Notes from the Field, the nineteenth entry in her On the Road: A Search for American Character series, Smith further explored the structural racism that defines life for so many Americans. Her research for the performance, for which she was awarded a Guggenheim Fellowship in 2016, included convening a series of town halls on race, education, and prison across America—in places like Baltimore; Columbia, South Carolina; Stockton, California; Philadelphia; and the Yurok Reservation in Northern California. From these conversations and other fieldwork, she wove together the stories of seventeen of her interviewees, focusing on the ways in which their lives had been affected by the US school-to-prison pipeline. Through Smith’s virtuosic dramatizations, a set of seemingly disparate protestors, politicians, students, educators, judges, and incarcerated individuals were each given their moment in the spotlight. The results were both revelatory and unsettling, but what was perhaps most striking about Notes from the Field was her incorporation of digital media and the African American vernacular tradition…

Shuffling and Repeating Beyond the Page